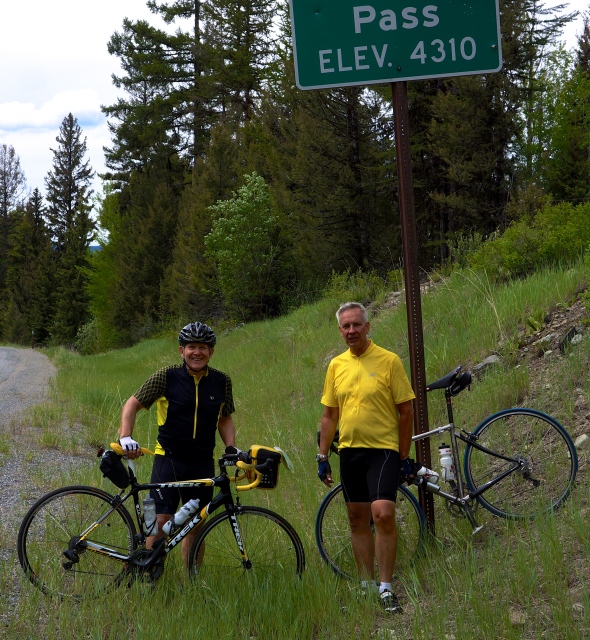 Today’s ride was basically one long flat ride (26 miles), one long climb (29 miles) and one long downhill (15 miles).  Best weather day so far even if 49 degrees when we began in the morning – lot of sunshine and warmth.  One of the most interesting moments was meeting two women my age from Georgia who are biking from Portland, OR to Freeport, ME to their home in Georgia.  They are carrying all their own gear, including camping gear if needed, on their recumbent bicycles (windshield included) – See today’s photos.  Their husbands and children had no interest in the trip and are following it on two blogs the women are posting.  Nancy, I offered them food and lodging if their ride from Maine to Georgia routes them near us.  You would enjoy them.

While the flat ride was nothing special, the views and scenery on the climb and ride down were magnificent (see today’s photos).

Over dinner at Ester’s Mexican in Republic, WA, population 958, we had conversations with local residents.  Republic is a one industry town – underground gold mining of old mines using new technology.  The future is uncertain as some mines are expected to close in 5 years.  Joining us at dinner were two more cross country riders, Earl from Southern CA & Lewis, a high school math/computer science teacher from Wellesley MA.  They were introduced by a mutual friend, but met for the first time face-to-face when they started the trip in Anacortes.  I have to admire them as they, like the Georgian women, are carrying all their own gear, including camping gear.

This entry was posted on June 23, 2012 by Steve. It was filed under Photograph of the Day .