Today was our second rest day of the trip.  It started by giving appropriate attention to my most important partner on this adventure – my bicycle.  I rode to the local bike store to have it checked our which was very timely as I had one of to handlebar stem bolts missing and my front crank was tight (it took two complete rotations to tighten it all the way).  I also bought a spare tire as insurance as I am the only person so far not to have a flat tire (the roads so far have been brutal on our tires).  In Minot (our next rest day in five days after three century rides), I plan on replacing my tires.

Afterwards, Jim and Doug graciously gave me a lesson on bike maintenance – cleaning and oiling my chain and gears.  Thank you Jim and Doug.

By 10 am we were ready to see the sights of Havre, MT.  We started with the “Beneath The Streets Of Havre & Havre Railroad Museum”.  While waiting for the underground tour, we walked though the Railroad Museum (which also served as a large waiting room for the tour).  It included a vary eclectic collection of model railroad cars, old newspaper articles about the railroad (the most important part of Havre’s history and founding) and railroad accidents, railroad posters/photographs, and railroading equipment.

Harve downtown burned in 1904.  Local merchants reopened their business by operating from their basements and opening an underground mall by connecting the basements while a local brick factory (for the replacing the old wood structures) was built.  It expanded greatly over the years and included at times auto repair shops, bakeries, chinese laundries, opium dens, barber shops, taverns, dental office, apothecary, meat processing center and markets (all of which we saw during our 1 hours tour of the underground – see today’s photos) just to name a few.  They also built overhead sky lights on the side walks/streets to provide natural lighting during the day.

The next stop was the Havre “Buffalo Jump” – a natural terrain element that buffalo were driven to so they could fall over the cliff and be killed.  The Havre buffalo jump was discovered in 1961 and excavated over the next 20 years.  Its 2,000 year use by three different native peoples was documented by the excavation.

The final sightseeing tour was the H. Earl Clack Museum which had an eclectic collection consisting of items such as dinosaurs (skulls and a 75 million year old dinosaur egg nest), native indian artifacts and history, western military outposts and life, and prominent local cowboys and cowgirls.

Here are my photo of the day – enjoy. 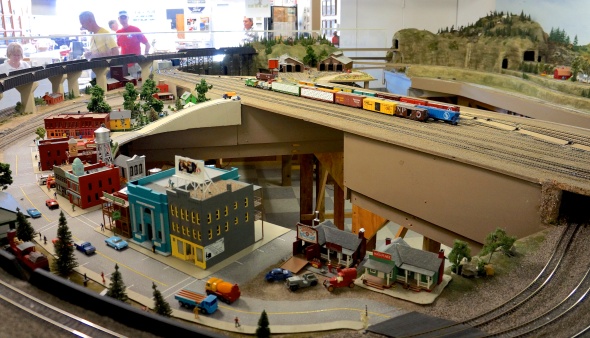 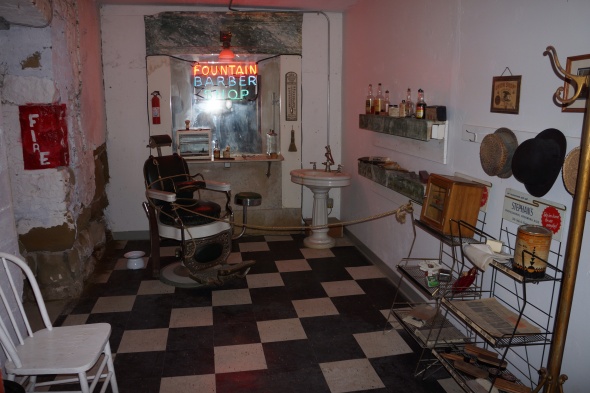 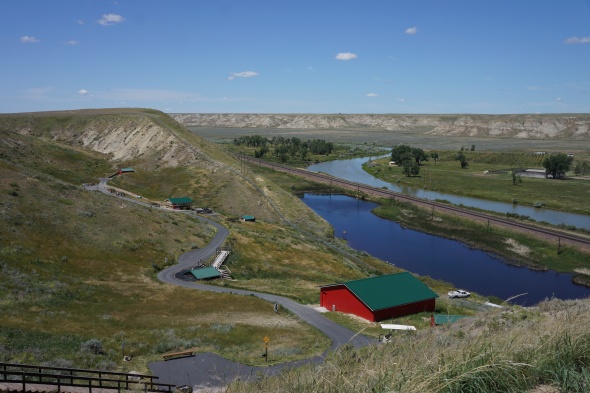 Havre Buffalo Jump Site – Each building is a different excavation. 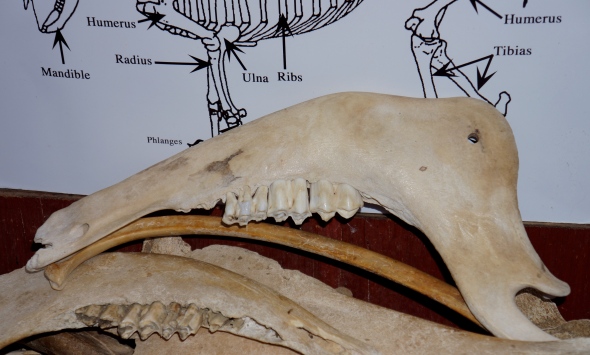 Doug successfully using an ancient indian “Atlatl” to “throw” a four foot dart (in the center of the photo with a red tail) at a buffalo. Note: I am revising this caption to make it clear that Doug is aiming at a buffalo replica. This entry was posted on July 2, 2012 by Steve. It was filed under Today's Photographs .